Do you have $850 dollars? Good – then rush on over to Margiela and pick up your very own bright gold candy clutch. Bling! It’s couture, so it’s obviously worth the investment. Man I bet both Warhol and Duchamp are exploding with delight right now. This hot “it” bag is totally an example of what my advisor Joseph Roach talks about as the superfluousness of accessories. I mean basically, bags like these are fabulous because they’re useless! No use in weighing down couture with, like, keys, wallets, lipsticks, cotton balls, condoms, tampons, or whatever else goes in there. I always say that the less sense a couture piece makes, the better it is. Only normal people need functionality or that, like, “useful” stuff.

Model of the Day: Sessilee Lopez 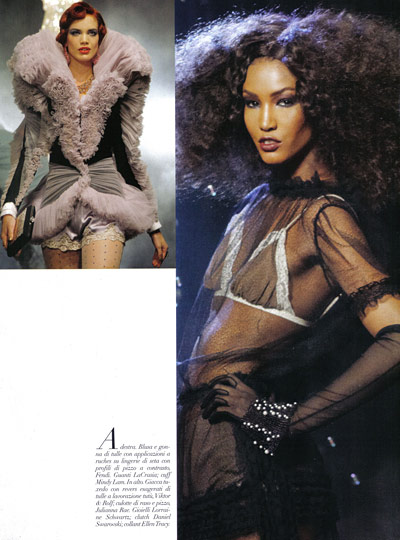 At 21 years old, Miss Girl is already a muse for Steven Meisel. Hey, remember that Italian Vogue All Black Issue? You know, the best-selling issue of all time? Well, the issue came with four separate covers, and Sessilee was one of the coveted four. Meisel has done a ton of editorials of her in Italian Vogue, like the one up top. Just look at her work! END_OF_DOCUMENT_TOKEN_TO_BE_REPLACED

The highly reputable and equally cultured folks over at Fox News are lighting a fire under Lady Gaga’s ass. Sandy Rios, the Grand Wizard of The Culture Campaign, claims that Gaga’s new video for “Telephone”- which you have obviously seen by now – is much too racy. Porn! Lesbians! T+A! A chopped off cock! “Telephone” is poisoning our youths, so much that on Monday CNN reported that MTV banned Gaga. Fabulous! Fox News Correspondent Sandy Rios thinks the video should be banned from all media outlets, period. And that’s not even the best part. Apparently, all those child molesters out there who watch “Telephone” – i.e. your next door neighbor – will only want to prey on your children even more after seeing the video. So I guess you should really be on the look out. END_OF_DOCUMENT_TOKEN_TO_BE_REPLACED

Model of the Day: Loammi Goetghebeur

This guy is relatively new, so he hasn’t done a ton of major campaigns or editorials. But Good God – somebody put him out because he’s on fire! I see a bright future for him – it’s only a matter of time before Tom Ford or Karl Lagerfeld adopts him as a “muse” – loosely interpreted! END_OF_DOCUMENT_TOKEN_TO_BE_REPLACED

There’s no way to know how official this is yet, but the folks over at Ivy Gate are reporting that psychedelic indie rock duo MGMT is headlining Spring Fling this April. Oh My Fucking God. FINALLLLLY a real musical act that will actually, like, be fabulous. In all my time at Yale, I’ve been ultra disappointed at the quality of Spring Fling acts. One year we had T.I. Really. I’ve been so annoyed at the peeps who run the Spring Fling shit can’t get their acts together and always bring sub-par acts to campus. Two years ago Brown had M.I.A. and Vampire Weekend at their Spring Fling. Don’t ask me who we had that year – I don’t even fucking remember.

Here’s to hoping the rumors are true! I am dying to see them play live – for free!!!

Is Chanel in talks to find a replacement for Karl Lagerfeld? It is rumored that Lagerfeld didn’t renew his contract at Chanel last summer, and those rumors resurfaced during Paris Fashion Week. What? No more Baptiste? Tommy Ton – from the street-style blog Jak& Jil – delivered this cryptic tweet at PFW: “I received some news tonight that is going to SHAKE the fashion world in the next two days. CRAZY!!!! …I can’t tell. I swore I’d zip the lip but I’ll tell you my mouth nearly dropped to the ground when the news was whispered into my ear.”

The announcement is expected “very, very soon,” but the word on the street is that Alber will replace Karl at Chanel. If you ask me, I don’t think this is the most earth shattering of news. It’s hard to imagine anybody replacing Lagerfeld at Chanel because, well, he’s been there for 150 billion years. While Lanvin does do beautiful work, Alber is less of a celebrity designer than Karl is, so it makes me wonder if the House is going in a new direction?

More earth shattering would be if Lady Gaga were named as Creative Director of Alexander McQueen. Now THAT would be news.

The 13 Most Fabulous Things About Lady Gaga’s “Telephone” Video

Okay, so you already know by now that Lady Gaga finally dropped the video for “Telephone,” easily The Greatest Music Video of All Time. In a fabulous “pop event,” the video premiered at 11:30pm on E! news – you know, once all the kiddies were asleep and safely tucked away from the poison and lesbianism that Gaga would obviously fabulize. “Telephone” is a super ambitious video, and it’s really, really perfect. It feels like it wants to go down in history – and it will! But am I the only one who thinks that “Telephone” totally talks back to all of Michael Jackson’s epic videos like “Remember the Time,” “Bad” and “Thriller” – all of which were highly anticipated mini movies, too? Also…when Gaga escapes the prison, she does a Michael Jackson dance move on her way out.

Take my word for it – “Telephone” is amahzing. It is a pop cultural landmark not only in it’s epicness as an event, or how it’s reverberated around the world and collects column inches by the second, but also in how the video is packed with references to easily recognizable pop cultural symbols. Aymar Jean wrote a fascinating piece about the insane branding in “Telephone” and how it solidifies Gaga as “our camp consumerist icon.”

You know what else solidifies her as a camp icon? The many fabulous things I found in the video, and I uncover 13 of them below! Read on to find out more! END_OF_DOCUMENT_TOKEN_TO_BE_REPLACED

Here’s a video of McQueen’s last bow. The presentation was only seen by 12 people, so the video shows you the collection in pure detail. Total, complete, absolute brilliance. Look at the craftsmanship, and the SHOES. Amahzing…

Tonight, Lady Gaga Brings Back The Landline And The Music Video

At exactly 11:30 pm, little monsters all over the world will affix telephones to their heads and watch as the highly anticipated music video for Lady Gaga’s new joint “Telephone” drops. Hey, everybody, that’s right after Project Runway! So at least if Project Runway doesn’t make it work, you’ll still have this to look forward to! 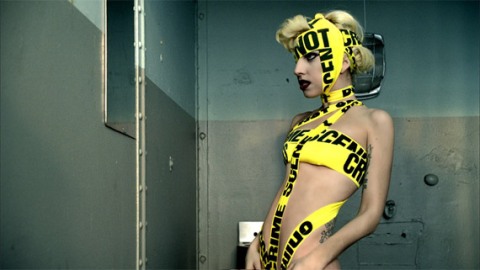 If you’re like me and have been listening to “The Fame Monster” since it dropped last November, you’ve been dying to have a video for “Telephone.” If you haven’t heard it, stop everything you’re doing and go listen to it RIGHT NOW. I promise that when you put “Telephone” on one time you’ll be like, “Oh this is a massive hit.”

“Stop callin’, stop callin’ I don’t wanna think anymore. I left my head and my heart on the dance floor.” YESSSS. It’ll give you multiple dance-gasms. Annnnnnnd it has Beyoncé it in, too!! Get it? Beyoncé did “Video Phone” and put Lady Gaga in it, and now The Lady does “Telephone” and puts Bey in it. Two of my favorite bitches in a single song. I’m having moment.

Everybody is excited about the video because it has taken f-o-r-e-v-e-r to be released as a single. Despite all those fancy performances of “Speechless,”  this is only the second single from The Fame Monster. But also, The Lady is building up her own hype around the thing: the video isn’t premiering on YouTube or whatever, but on E! and they’ve been talking it up since the Oscar’s. Plus, after the video premiers, there’ll be an exclusive interview with The Lady where she will undoubtedly philosophize on the video and all the couture and face masks therein.

This is a totally brilliant pop strategy, if you ask me, because she’s creating an “Event.” How performance art-y is that?!?! “What I like about it is that it’s a real true pop event. When I was younger I was always excited when there was a big giant event happening in pop music and that’s what I wanted this to be.” Now that we don’t have TRL or music videos anymore for that matter, Lady Gaga is taking us waaaaay back to World Premiere videos at 3PM on TRL with Carson Daly. It’s time to get old-school. So quick, everybody – throw out your iPhones and HDTVs! 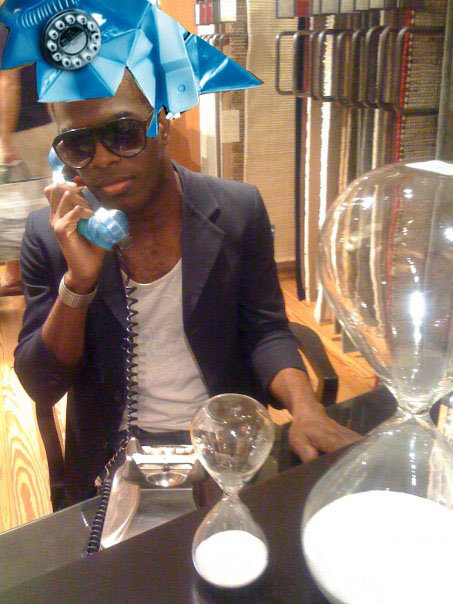 The “visually stunning” masterpiece is nine minutes long – faaaaaaaabulous – and picks up where “Paparazzi” left off. Gaga has even said that she feels sorry for the “Bad Romance” video, because “Telephone” is so much better.  Can’t. Wait. Judging by the couture alone, the video will be massive. I’m wearing a telephone on my head right now in celebration.

If you don’t have cable, don’t worry, monster. The video will be available on VEVO and LADYGAGA.COM at Midnight for you to watch over and over and over again. Click.

Did Anybody Else Think Louis Vuitton Was Boring and Matronly? 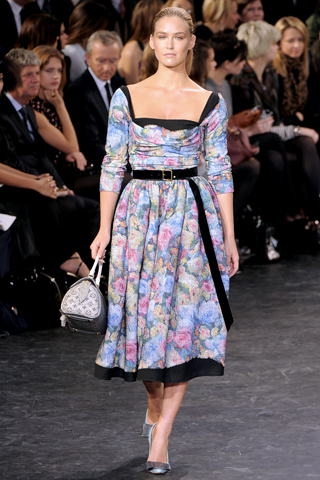 Usually Marc Jacobs does some really exciting stuff and I find myself thrilled to see just what he’ll do next. Oh but not this time, Marc! The show was discombobulated and all over the place. It reached for a 1960s vibe a la Mad Men, but if you ask me, Prada did it better…

There were a few things I totally dug from the collection – like the clean, fresh faces, almost “no make up.” And I dig that black and white old-school television static coat, and some of the handbags were really interesting.

And I love this look, the gloves, the skirt, everything. It feels like what a 1960s high society gal would wear right now.

But I just didn’t “get” the rest of the collection. Like…what the hell is going on with that pastel floral dress? I hate the print…actually, I hate everything about this look. It’s supposed to be 1960s, Mad Men. I get it. But overall the collection was inconsistent – some pieces were great and some were just kinda eeh.

The good news, though, is that Vuitton used different types of models, such as “curvy” and “older” models like Alessandra Ambrosio and Elle Macpherson, so like that part’s cool or whatever.